Shamelessly Feminine | One Man’s thoughts on the Vagina 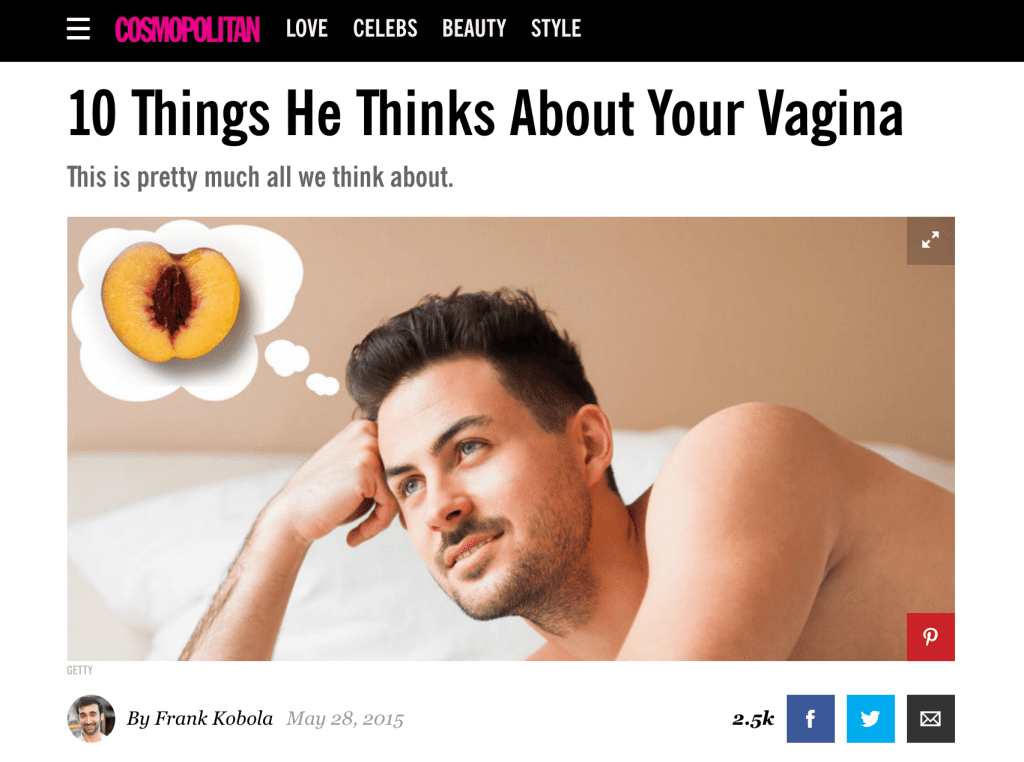 I woke up this morning and like most mornings, reached for my phone and caught up on social media. First was snapchat where I found this gem of an article from Cosmo Mag. 10 things he thinks about your vagina. The title alone was comical, so I had to read on.  Let’s take a look. 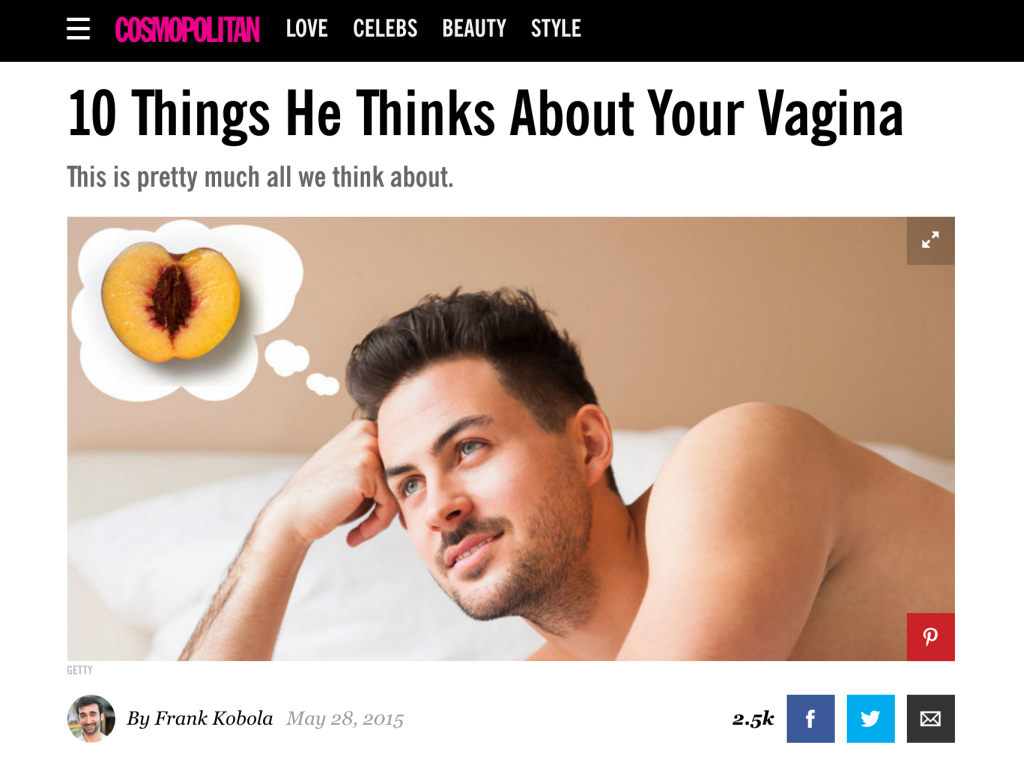 That’s some title. I have to say it captivated me and the article was truly entertaining, which I am assuming is the point. I mean you can’t expect to be educating anyone with an article like this. What is point of this article? Oh right, to objectify pretty much the only thing you think about.  Vaginas.

That’s actually kind of sad Frank. I mean, listen.. I have a vagina. I KNOW how cool they are, so I guess I can’t blame you for thinking about them or wanting them. I get the draw, I am with you on that. The ONLY thing you think about though? Wow. That must be exhausting and pretty repetitive.

In your article you ask some questions and make some statements. They are kind of open ended, so I thought I would help you out and address some of your curiosities. Let’s break it down a few at a time:

1.What does her Vagina look like? Well, Frank, you are right about one thing. They are all different, all beautiful and all unique just like the woman it is attached to. You know… the woman. The person you seem to have left out of this article. What you are doing here is objectifying vaginas.

Maybe you don’t realize that. After all you said that vaginas are all you think about. So it is clear that you don’t often think about the women that own them. Cosmo in infamous for articles about women’s bodies and how to improve them. In fact, media itself has given us a warped reality of what women’s bodies are, causing body issues, body shaming and low self esteem. This is especially true for younger, more impressionable women. You know, the ones reading your magazine. They are already obsessed about how their body looks. Now they have to worry about their vaginas too?

2.Its not the vagina that is the mystery, it’s the woman it’s attached to. We all have different turn ons and sensitivities. Do you want to know why we all work differently even when made up the same biologically? It’s really very simple. It’s because we have brains. Have you ever thought about a woman’s brains Frank? Those are also all different, beautiful and unique. In fact, if you like vaginas so much, I feel obliged to give you a little hint. Usually, the way to a woman’s vagina is through her brain. Thank me for that tip later.

3.Well, at least it’s a compliment. Although I have to admit, I am slightly curious what you have to compare it to.

5. If she is orgasming, it either feels good, or she is faking it. If you aren’t sure which one it is, or what she likes… ask. It goes back to the brain thing again. We like when you ask, when you care and when you want to please. It makes our brain and our bodies happy.

6. The point of a tampon is that you shouldn’t be able to feel it. If you can’t imagine walking around with something up your butt all day, now would probably be a good time to take your head out of it.

7. Yeah we have a clit and vagina. Lucky us. I like to think of it as the universes way of paying us back for bleeding profusely once a month for a majority of our lives. In addition it’s also retribution for all the other things we need to deal with. Yeast infections, cramps, UTI’s, ovulation, pregnancy, miscarriages, OB/GYN exams, BIRTHS, birth control, hormone imbalances, waxing… should I go on?

#9 is for sure my favorite:

9. I really don’t even know where to begin with this one. Let me explain something to you. Vaginas are a sacred place and should be treated as such. I think I speak for most women when I say – ew, GROSS! Our vaginas aren’t storage facilities, grocery stores or Mary Poppins purse. No shaming any women who might have gotten down with a corn on the cob, but Frank,  I mean really, what the fuck?

10. I think you should give compliments. In fact, maybe if you compliment the woman that owns the Vagina, you’ll actually get to think about them less, and see them more.

Cover stories on Cosmo as well as many other women’s magazine usually read as such: “Shrink your inner thighs in 6 minutes a day” and “Feel your best in a bikini in 5 moves”. These ridiculous suggestions are secondary to the articles about how to please men. Articles range from “Simple ways to make him worship you” to “10 things guys crave in bed” are pretty common in most editions.

Frank, you write about sex. I get that. Clearly you love women (or at least their body parts). I get that too. So my burning question is, why is it that you are contributing to the objectification of women? Why aren’t there more articles titled: “Simple ways to learn to worship yourself” or “Feel your best in a bikini all the time”? Millions of people read Cosmo every month. MILLIONS. Is the only way to gain readership these days with shocking headlines, objectification and beyond photoshopped images of perfect women?

Frank, I would like to think that if you truly love sex and women there has to be some articles you can write that will still gain you readership and uplift women at the same time. Articles that will teach men to treasure women as a whole, not just body parts. Articles that will help women become comfortable with their bodies and sexuality.  Think about it. You know, in those few minutes you aren’t thinking about vaginas.

You can find out more about which cookies we are using or switch them off in settings.

This website uses cookies so that we can provide you with the best user experience possible. Cookie information is stored in your browser and performs functions such as recognising you when you return to our website and helping our team to understand which sections of the website you find most interesting and useful.

Strictly Necessary Cookie should be enabled at all times so that we can save your preferences for cookie settings.

If you disable this cookie, we will not be able to save your preferences. This means that every time you visit this website you will need to enable or disable cookies again.